Cross posted at LinkedIn, if that’s your thing.

“White Fragility” by Robin DeAngelo is a great book about racism. You should read it. This blog post tries to get you to read it by extracting what I think are the best parts. That’s why it’s so long.

The best indicator that a white person really needs to read “White Fragility” by Robin DiAngelo (Beacon Press, 2018) is their first response to the mere suggestion that they read it. This speaks to two things: 1. a great title 2. the absolute necessity for more white people to read the book. I have only suggested it to a few people, but reactions range from indignation to scorn. One person told me they thought I was “too smart to read a book like that”. I hope this brief moment of national awareness prompted by the murder of George Floyd by an agent of the state might give such people a reason to read this blog post, and then hopefully Ms. DiAngelo’s highly accessible 154 page book. This blog post is my selection of highlights from the book, with occasional thoughts mixed in.

Ms. DiAngelo has done many years of trainings and workshops about racism to mostly white audiences. If you work in corporate America, you probably have been exposed to this kind of training. You may even resent having had to take it. In my case it was web-delivered training that really can’t offer the kind of growth an in-person class can offer. If you had in-person training, this book may resonate even more with you. The in-person training done by Ms. DiAngelo and her company produces real interactions and reactions from the participants. These reactions and related observations are the research corpus for this book. When Ms. DiAngelo says, “this is how white people respond when I say X,” I trust her credibility. I’m asking you to do the same, at least while reading this blog post, and, hopefully, reading the book.

I’ll take a really nice hook from the end of the book and try to set it here:

Reading this blog post is a great start. Reading the book would be a great next step.

Ms. DiAngelo starts out by showing the scope of the problem, and how completely intractable it is, but somehow manages to make me able to keep reading. The hook is how she does it: not through some sugar coated sense of hope, but through honesty and candor. As I read the book I get the sense: yes, I can do this.

Ms. DiAngelo commences with an Author’s Note which sets the tone with these facts:

If you dispute these facts, or even the existence of facts themselves, then any discussion about the content of this book or any other book is futile unless the differences between your worldview and mine are taken into account. This article from the peer-reviewed journal “Systems” in 2018 is a good place to start: A Systematic Framework for Exploring Worldviews and Its Generalization as a Multi-Purpose Inquiry Framework. My epistemological worldview disclosure: I believe the scientific method can progressively reveal the truth about all real phenomena.

This is the most succinct business case for a diverse workforce I have personally ever seen.

Chapter 1: The Challenges of Talking to White People About Racism

White people need to be comfortable being seen as white. Racially.

Basically, if you react in any of the above ways when talking about whiteness, and what it means to be white, or blackness and what it means to be black, you are showing white fragility. Another term she uses is “racial stamina”. This is the ability to not react that way. In my opinion, the use of the term “stamina” is a nod to how even the most racially aware white person must always exert effort to not react with white fragility because of how thoroughly the social construct of race is unavoidably encoded in civilizations thus far, including the one in which I was raised and continue to live.

She calls out two key western ideologies which hinder white people’s understanding of race. I had trouble understanding this. I probably won’t capture it well, so read the book.

The cardinal rule of individualism is: don’t generalize, yet:

Basically, if you think you’re special, you’re really not. You are completely formed by the system you grew up in and continue to live in. Y’all ain’t that special.

(Aside: The Objectivity of Subjectivity scene from Love and Death covers objectivity also. Yes, Woody Allen is implicated in #MeToo, but Diane Keaton is quoted here supporting him. It’s still a funny movie.)

Because individualism is a lie, you really can’t be objective, because everything you observe is from your group perspective. Stick with me here

We Have a Simplistic Understanding of Racism

Now she gets to the problem with how white people define racism. If you take one thing away from this blog post, it’s this.

The importance of being seen as white.

To understand racism, distinguish it from prejudice and discrimination. Prejudice: all humans have it. It is unavoidable. It is part of cognition, so it is a mistake to call it bad.

Discrimination is action based on prejudice. Emphasis mine. But here’s the first occurrence of a succinct definition in the book.

That said, I can finally summarize her definition of being a racist: a racist is someone who has been shaped by a racist system. You can see a video with Ms. DiAngelo at tolerance.org. At 21:38 in that video she gives that definition.

I accept this definition, and I acknowledge that by this definition I am a racist. Let me illustrate with a concrete personal example. Richard Rothstein’s 2017 book The Color of Law examines the racial aspects of federal lending and housing policies (including those of the Trump family). The house I grew up in was financed by a mortgage whose rate was not accessible unless you were white. So, in addition to all the other ways in which I have been shaped by a racist system, this one very concrete way is quantifiable and indisputable. If you want learn more about the housing aspects of racism, listen to this interview with Richard Rothstein. I like focusing on this aspect because it is factually defensible (again, my epistemological worldview showing up).

Whiteness as a Position of Status 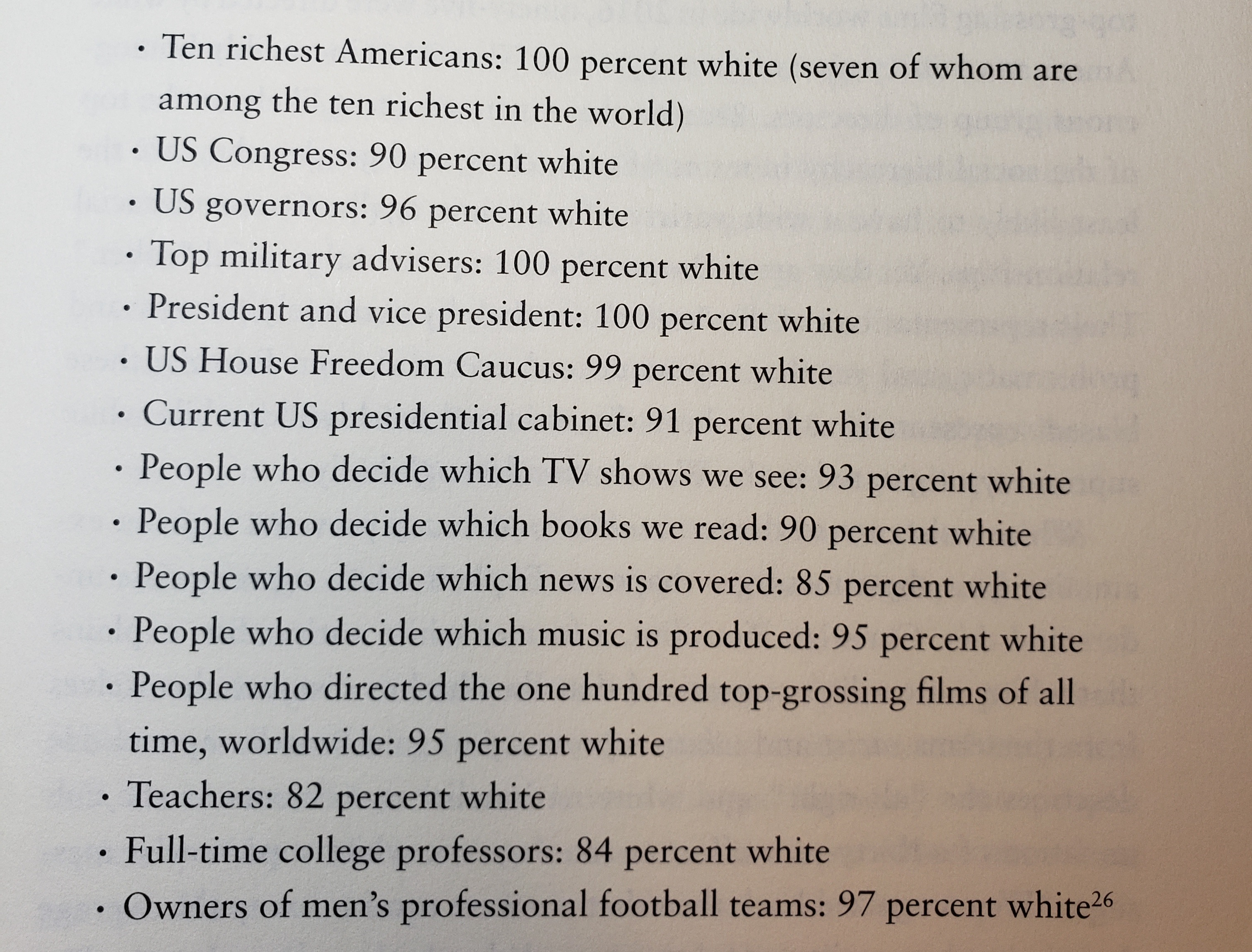 Who doesn’t like trying to get to the root cause of problems? I’ve long fingered Republican strategist Lee Atwater as at least close to the root cause for a lot of the problems I see. Ms. DiAngelo does as well. 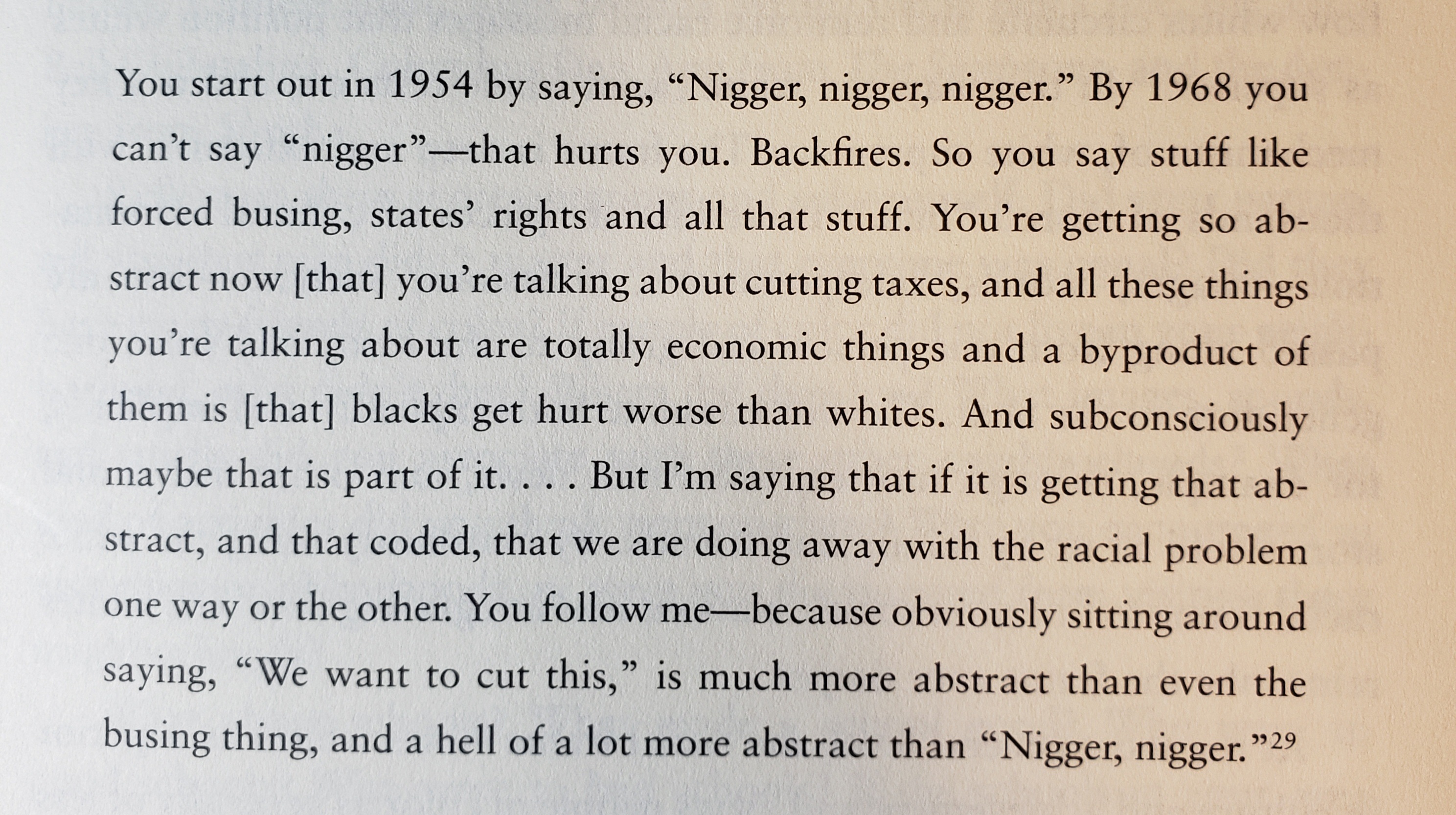 Mr. Atwater is explaining more than the Southern strategy. He is explaining the birth of the good/bad binary. This sociolinguistic construct is what has enabled racism to continue to thrive and grow since the civil rights era.

Aside: The reason they saw this, and were appropriately appalled, was broadcast TV. Not cable TV. Not hyper-personalized Internet TV. Broadcast TV. Curated and, yes, censored by the FCC. But it was still very much seen as “the people’s airwaves”. The media during the civil rights era was not nearly so effectively monetized as it is now. If we had today’s media landscape during the civil rights era, none of the civil rights era would have happened. The people that were “appalled” as Ms. DiAngelo says above wouldn’t have even seen the content because networks like Fox News would not be able to air it for fear of alienating their audience, and thus, their sponsors. As it happened many of those Northerners got on busses and joined in the marches, and took the punches, and ended up in jail as well.

If you are interested in how the media got so messed up as it is today, where it is seen as an “enemy of the people” by many Americans, please study Edward R. Murrow’s speech from the 1958 Radio-Television News Directors Association conference on 1958-10-15. Of course, the media are not the enemy of the people, but because they are so effectively monetized by playing on the very worst of human nature, it is very easy to find examples that justify that fascist analysis of the (still) free press.

Yep. I was that way until I read this book. I guess that means I’m woke? But, really, I’m still that way. But now I know that I need to constantly try to interrupt racism whenever I can. 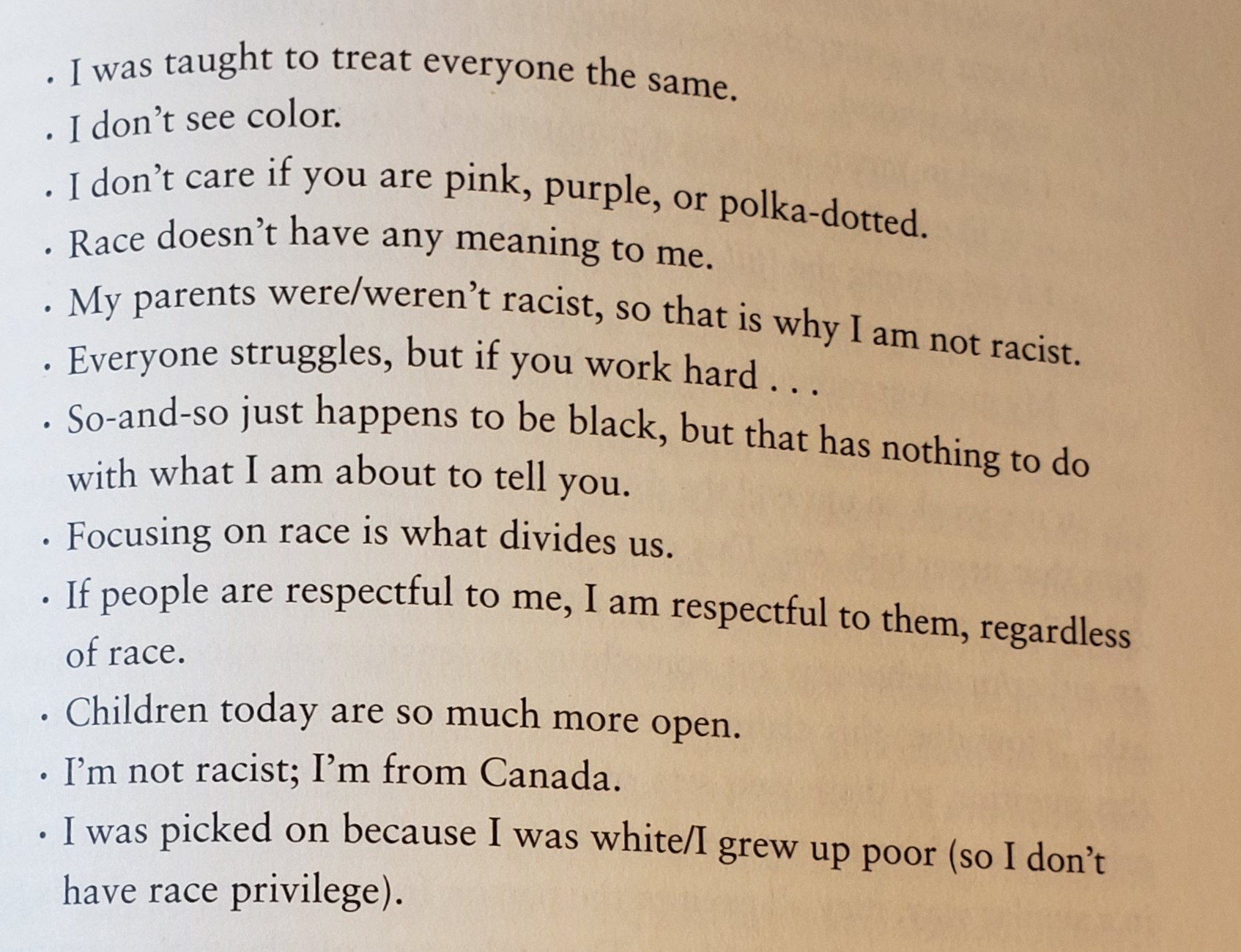 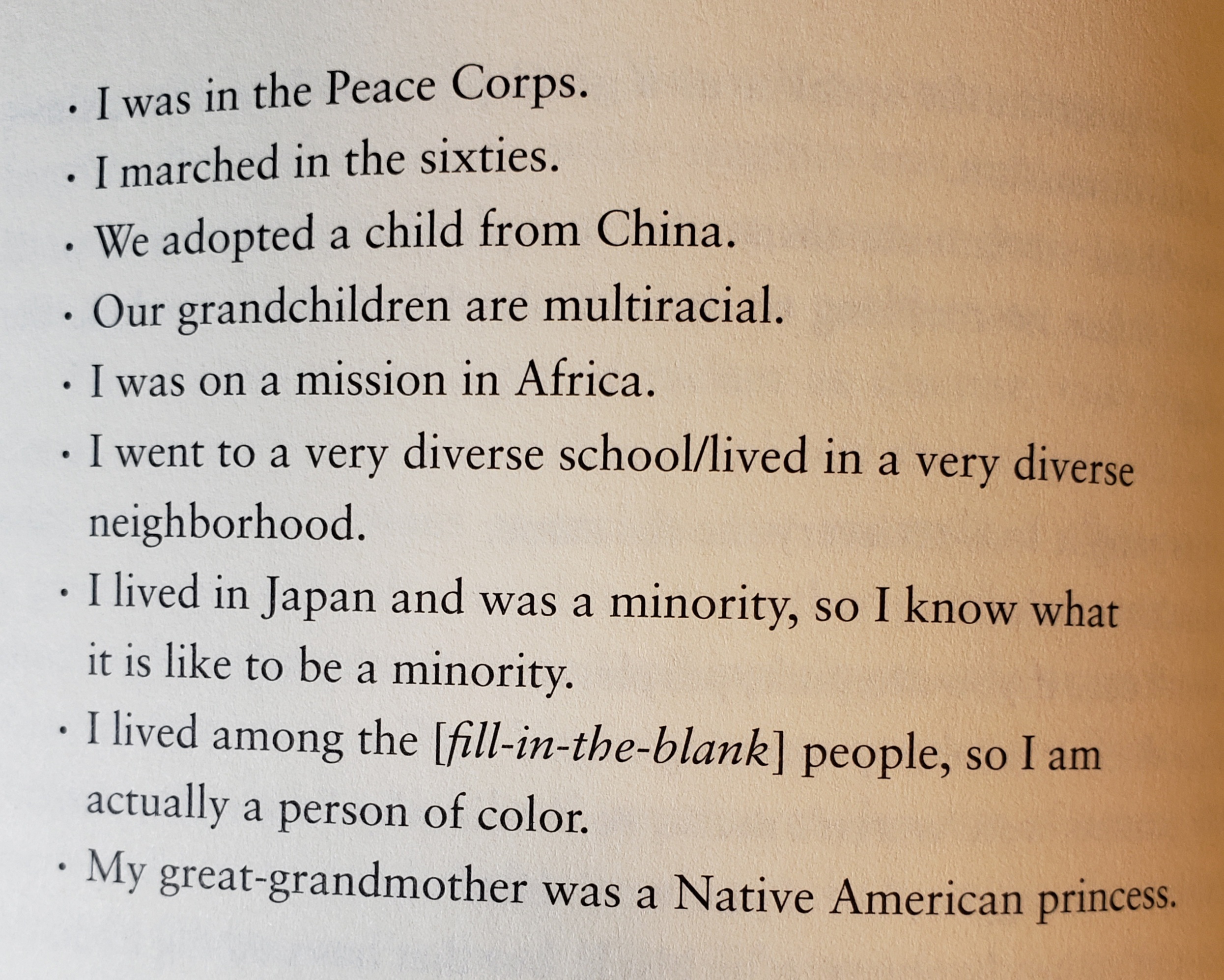 Ms. DiAngelo states that she’s heard all of these claims in her work at teaching tolerance. I believe her. I’ve heard them myself, and if I interrupt racism, I’ll hear them a lot more.

And you thought only liberal snowflake SJWs could be “triggered”? Turns out no! 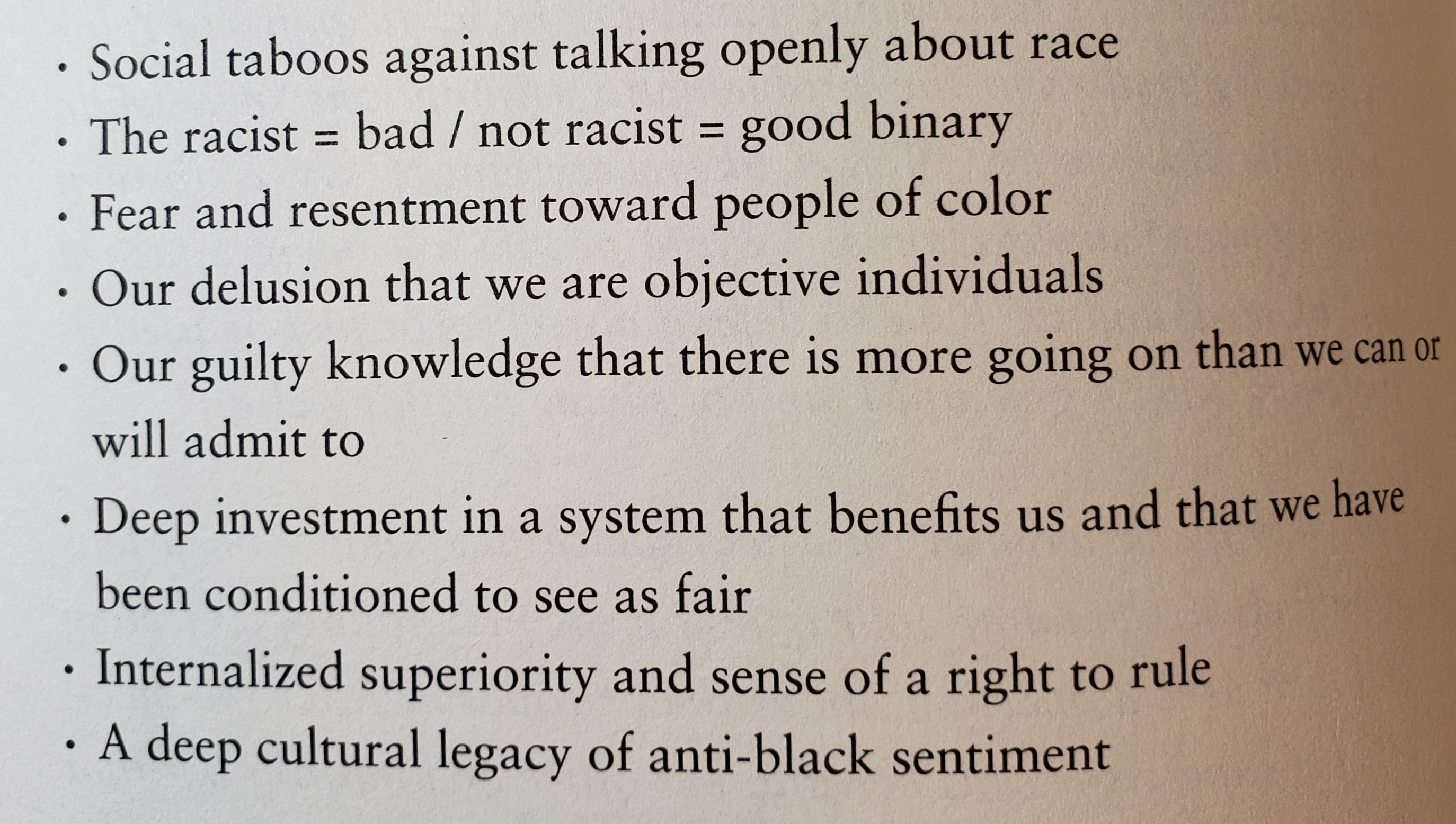 Now she finally answers the question, “what can we do about it?”. She calls it interrupting racism (FWIW, I prefer racism interrupted). 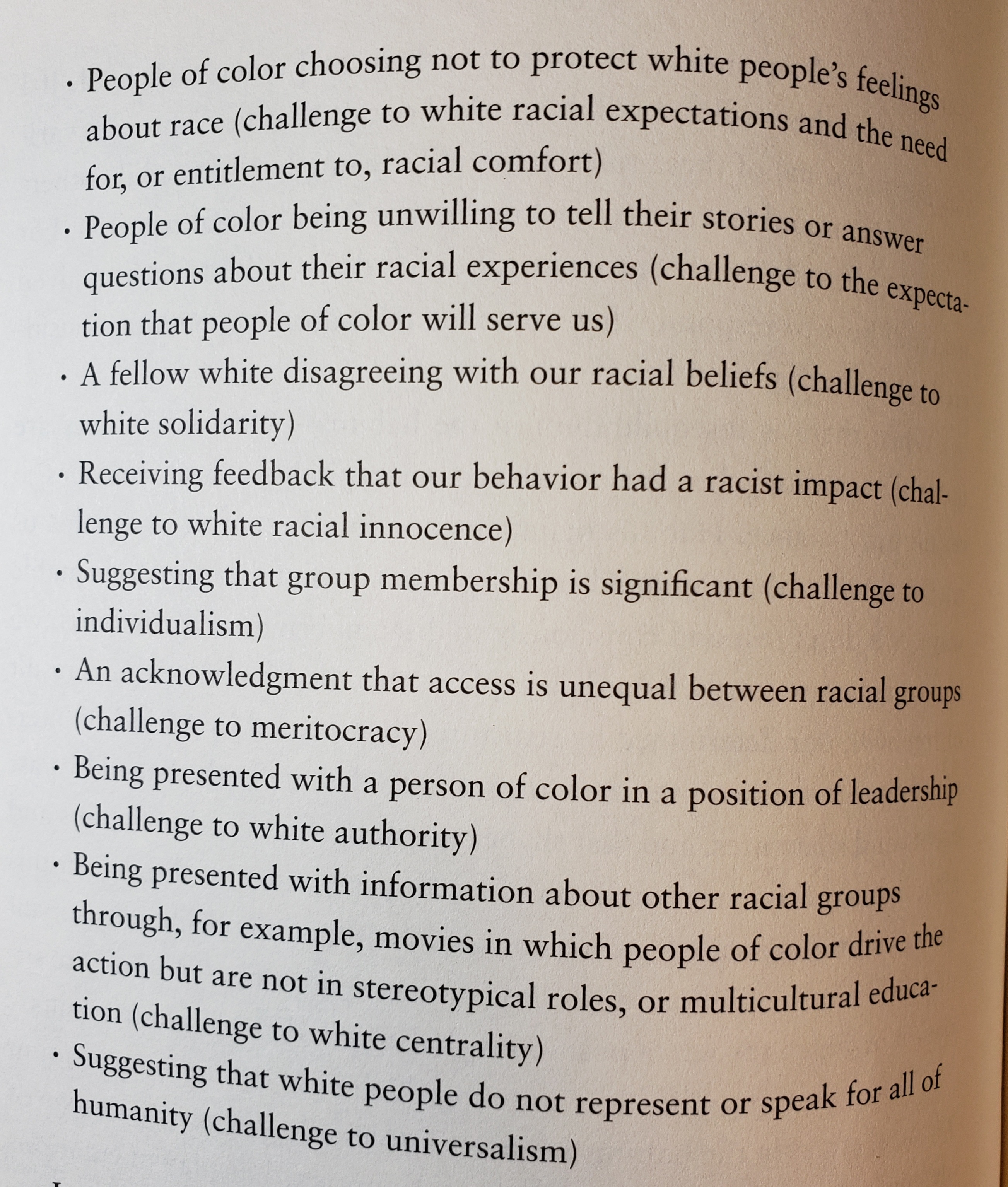 I get the sense here that this strategy of interruption can be used in other contexts than racism. There’s probably a playbook somewhere of how to abuse this strategy to manipulate someone. Perhaps this is something master gas-lighters instinctively know how to do.

In this chapter, Ms. DiAngelo recounts stories from her work teaching corporate tolerance classes and shows how the concepts explained in the preceding chapters play out. The feelings, claims, triggers, assumptions, and interruptions can be seen in action.

Chapter 12 Where Do We Go From Here?

By this point, the reader should know:

At long last, chapter 12 gave me hope by really showing me, “hey, I can do this” and “hey, this is really worth doing.” I hope you end up with the same feeling. 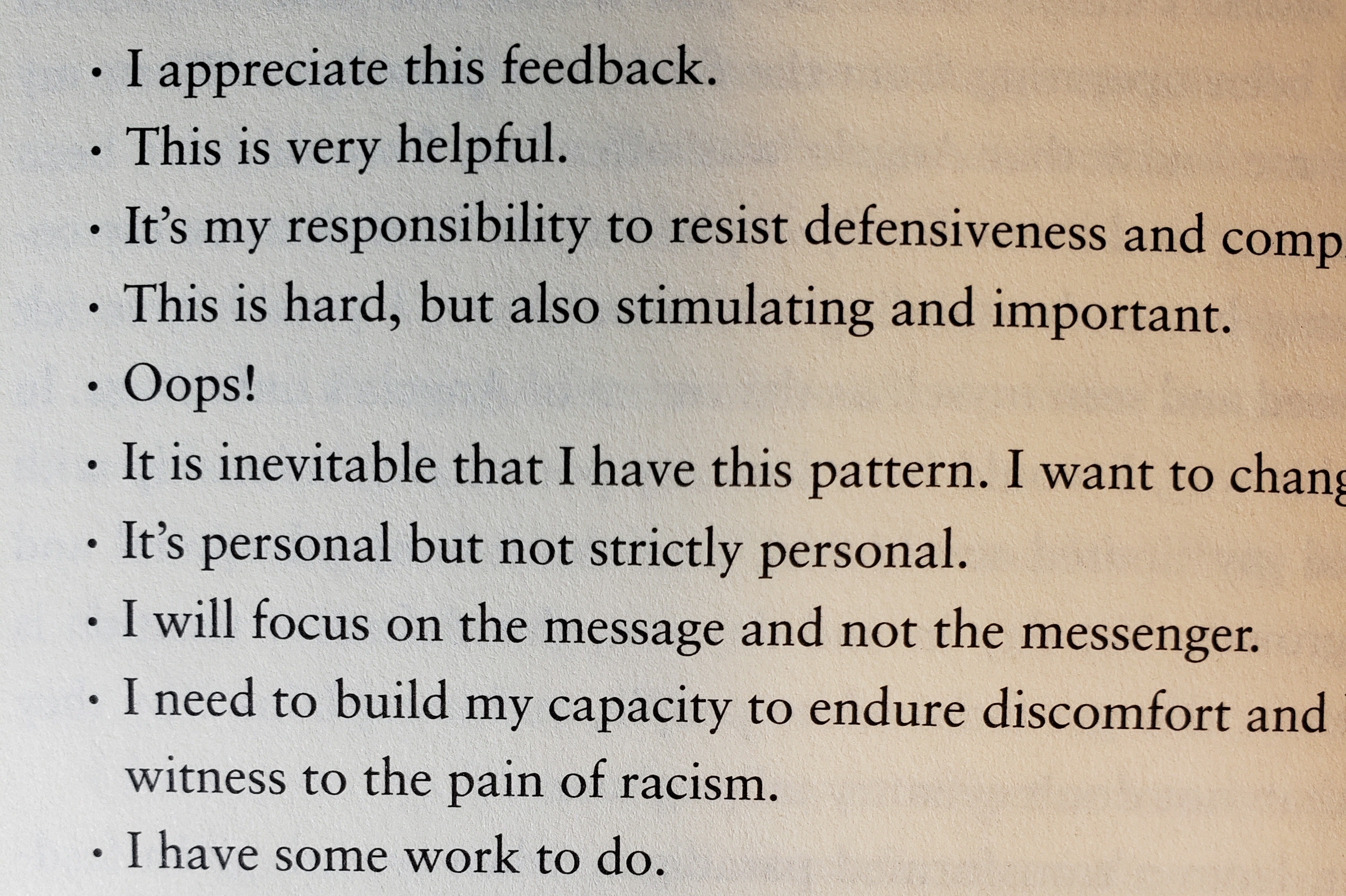 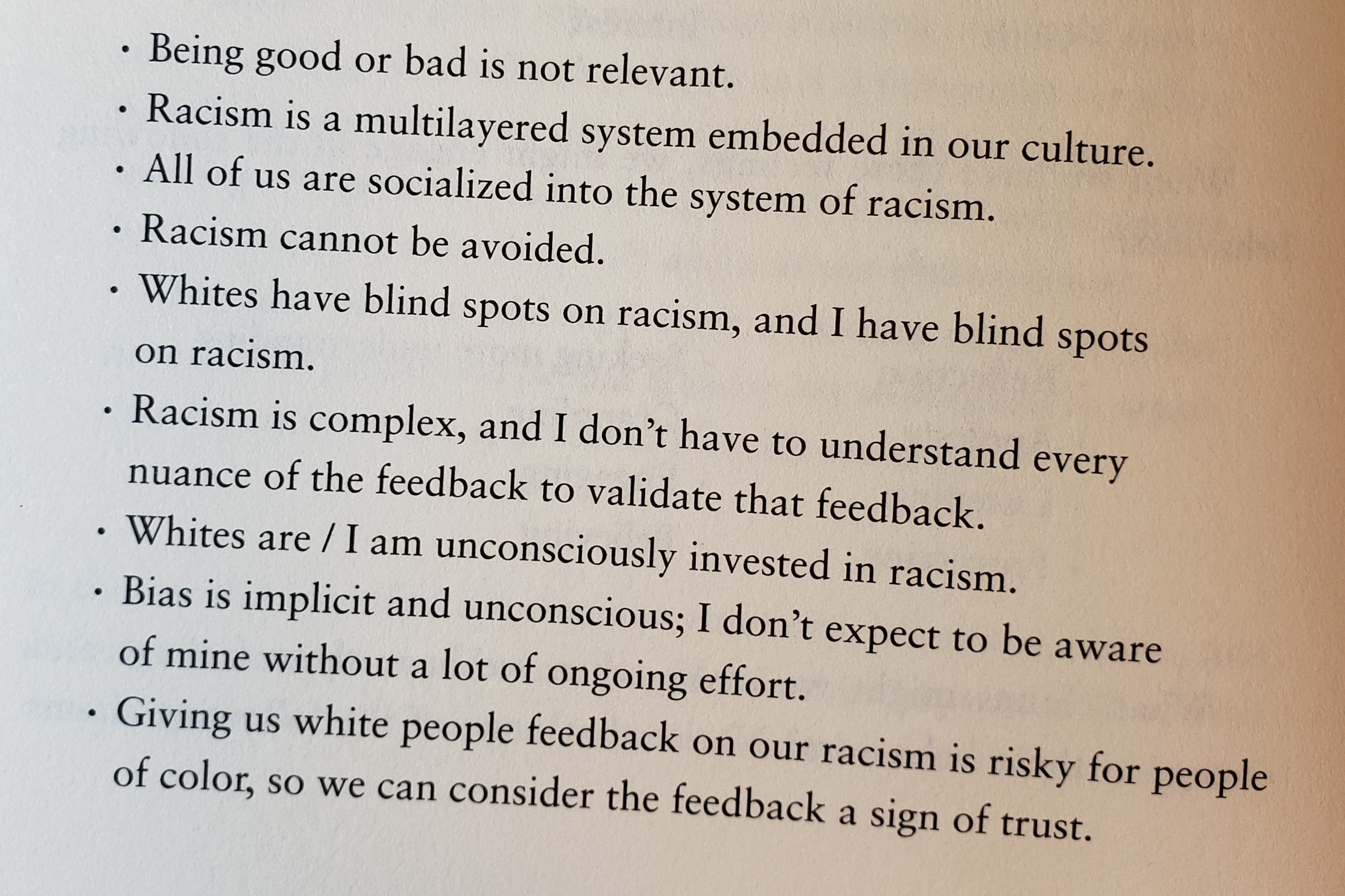 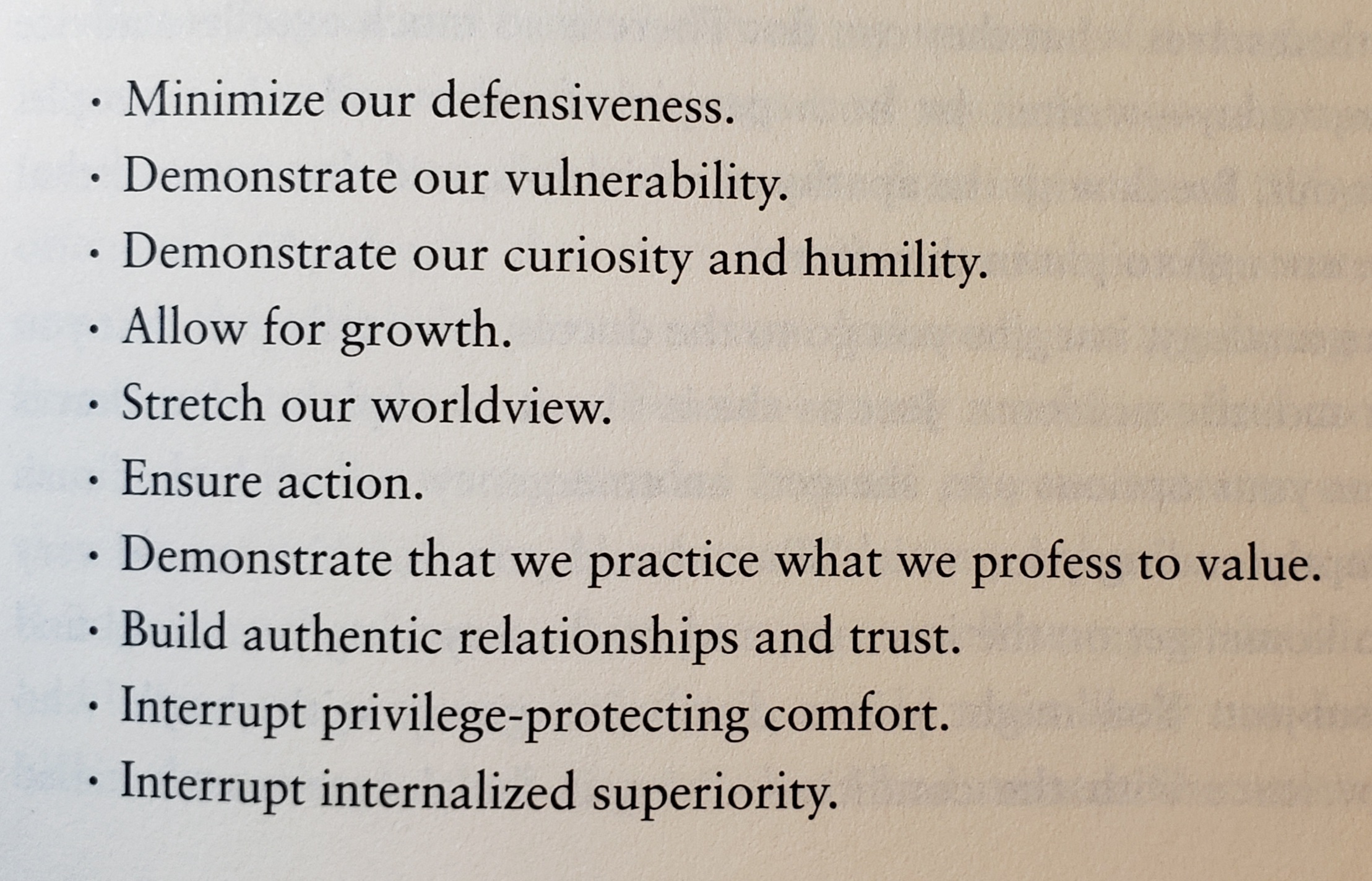 I’ll close with the hook I set at the beginning.

To illustrate the importance of taking action to combat “the apathy of whiteness” Ms. DiAngelo asks the reader to engage in this thought experiment.

I didn’t start doing my homework until I was 48 years old. I’m ashamed it took me that long. On the other hand, it’s never too late to start. If you got this far, you have made a great start on doing your homework. Thanks very much.