This document captures the essence of my keynote talk, “Innovation, Gratitude, Compassion and the Cloud”. 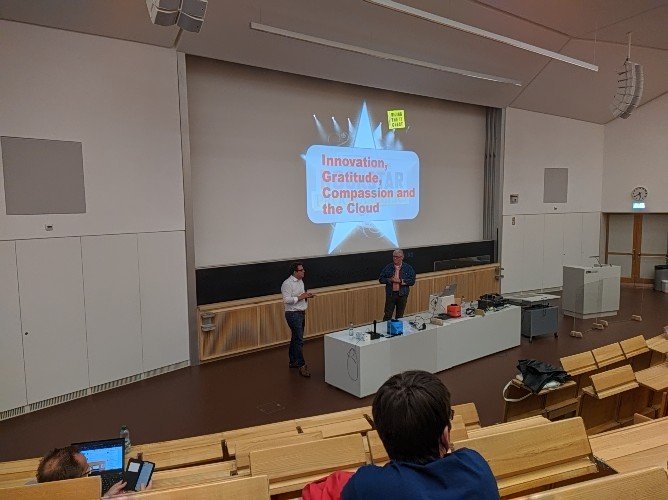 Every one of us hearing this speech is fortunate enough to work in the IT industry and can improve the quality of our individual and group innovations by being thankful for prior innovations and aware of the tradeoffs that made them succeed over time. Let’s go through each section of the speech and see how I expanded on that theme.

Here, I set the message: “take some time to think about how we got to where we are and be thankful for it, and find a way to give back”. I used a Global -> Local progression.

I’m thankful to be here, especially in the face of COVID-19. Yes, I want to say the usual, and appropriate, thanks to Marcus and the team, and I’m honored to help celebrate 30 years of Workshoptage. Let’s take a moment to recognize some big things that had to happen to bring us to this point:

In the middle section, I looked at a few technology domains that enable today’s public cloud and asked about the tradeoffs that were consciously made by the stewards of that domain to bring the technology to its present state. Here are some points that guide the examination of each domain and its tradeoffs.

Here I mention my former colleague at Sun Microsystems Dick Gabriel, and his brief essay Worse is Better. Very interestingly, he mentions the legendary Jamie Zawinski, whom I have always esteemed but never managed to meet.

My premise for the middle section is that the technologies that enable the cloud were built and are continually developed using “Worse is Better”, but we insiders have a responsibility to question that way and try to at least understand the tradeoffs.

The packet switched networking underpins the entire Internet and all public clouds was a radical idea when it first emerged. You must remember that the telephone industry came from telegrams, then switchboards for voice, but all of it was connection oriented.

The concept of breaking a message up into little chunks and then putting them back together when all of them arrive was a radical idea.

Networks, and the companies that ran them, were accustomed to connection-oriented designs.

Practical capitalism, the kind one which one can build a stable career, tends to have a problem with radical ideas: They would rather not be disrupted by them. Even so, the benefits of packet switched networking, in terms of cost, resiliency, and flexibility could not be denied.

Networking is where the idea of interoperability is essential. For that you need standards. This gives me an opportunity to riff on the heroes of standards.

Because networking is so fundamental to the cloud, many of the terms from networking have seeped into general IT usage, such as “control plane” “Day minus one, day zero, day one, day two, day N operations”, “North-south” “East-west” on diagrams.

I ended the section with a survey of WAN, LAN, and Consumer services, showing the winners and losers in each section, and also having an opportunity to drop some fun old names that no-one hears about any more. BITNet, DECnet, Toekn Ring, Minitel and Prodigy for example.

Here are some assorted links of interest for this section.

In this section I talked about how information is represented.

Just as with the networking world, there was a lot of debate about how responsibilities should be broken down.

Earlier attempts were informed by our existing thinking of information being in centralized libraries that are indexed and connected. This lead to the creation of distributed index technologies such as Archie and Gopher. Each node was responsible for indexing the information it hosted, and sharing the ability to search that index with other nodes.

Then Tim Berners Lee comes along and says

YAGNI (you ain’t gonna need it), just give me two things:

Centralized indexing and imparting semantics to larger collections of text files is outside the scope of his problem.

With centralized indexing, Each server had to know about the others. When you say YAGNI to this idea, lots of magic happens.

This turned out to be really popular. It lowered the barriers to entry, and also discarded a lot of the semantic richness of the other systems. In the end mass market wins. Worse is better, right?

However, notice that since the early Web deprioritized the semantic richness of centralized indexing in favor of ease of authoring and hosting, there have been numerous efforts to put it back. Remember “the semantic web”? Technorati tags? One could argue that Google Page Rank, utm tags, and SEO is a way to associate semantic richness with web pages, but it does so in a completely propietary way, optimized more for revenue creation than user value.

Much older historical aside: Minitel

In 1981, France Telecom offers free Minitel terminals to every phone subscriber, launching the first mass “Web.” Minitel will have tens of millions of users by 1990 and online services such as newspapers, train schedules, tax filing, and erotic classified ads as well as email and chat. The ‘80s Minitel boom heavily foreshadows the dot-com boom. But the business model is different. Customers pay by the minute for access to Minitel services (sites), charged on their phone bills; France Telecom keeps about a third and passes on the rest to the service provider. As in the later Web, Minitel service providers run their own servers. But they also pay France Telecom a fee to connect to its network. Despite major efforts in the US, Canada, and Europe, similar videotex systems will fizzle outside France.

Minitel and other systems needed to have some kind of system to author content on the system. Such systems had many of the attributes of early HTML, but were propietary and did not benefit from economic network effects for tools and talent.

In this section I recounted my early direct experiences with the web and two important developments. 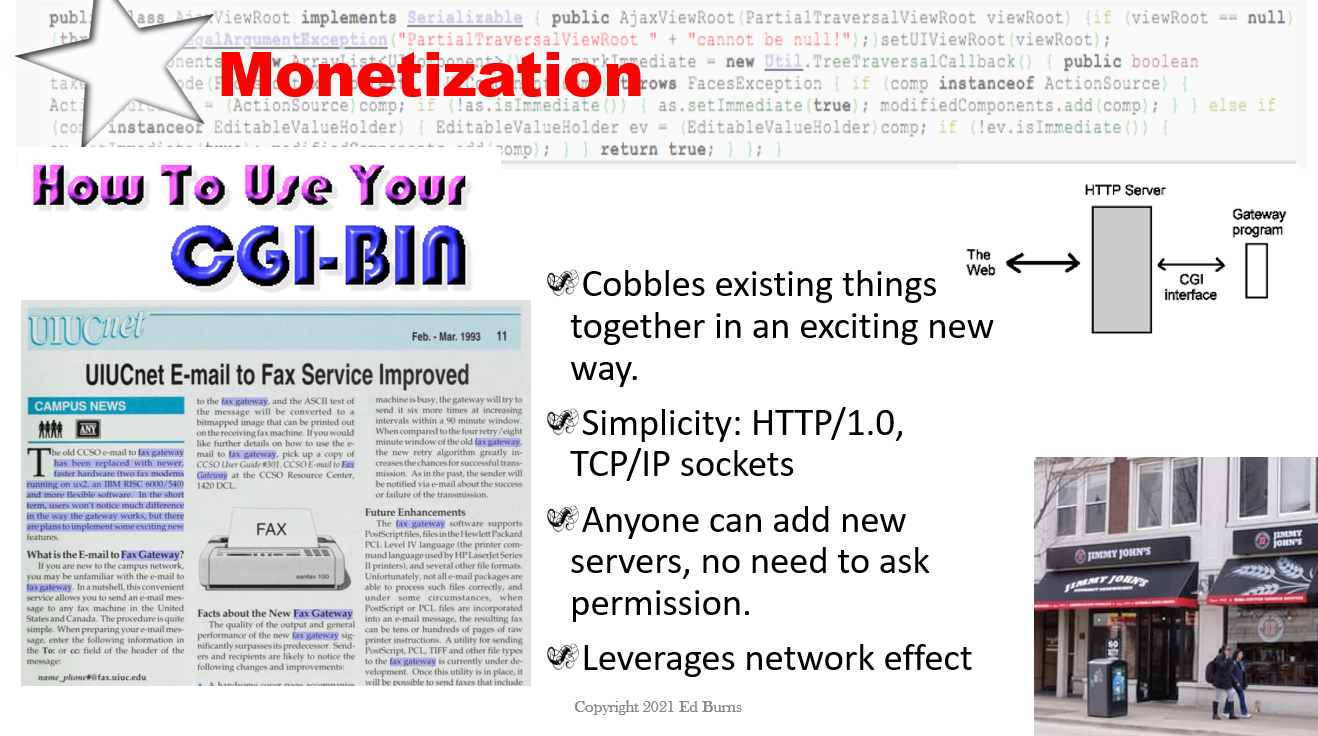 These two inventions, combined with the ease of authoring for cross-device reach, even in the early web, attracted the attention of venture capital. When VC gets involved, the pressure to follow “Worse is Better” becomes even stronger. The growth boom of the early Web spilled over to other technologies as well. Consider UNIX SMTP based email. The protocols that enabled UNIX email to grow and become widespread did not have any strong concept of aggregated authentication. The absence of such capability haunts us to this day, and has created the SPAM and phishing industries. Perhaps if more time had been invested making email more authenticated and secure when email was new, we would not have had as many hacks as we have that started with phishing.

My time at Sun Microsystems coincided with the introduction of “Utility Computing”, in 2004. This was an idea before its time, and also at the wrong home. As I explore in the next section, cloud scale can only be possible with commodity everything, and Sun was a boutique hardware company. The early efforts at cloud were also stymied by the lack of a concept of containers, though Solaris did have Zones. Docker itself started in a similar way, with LXC, but now using libcontainer. Happily, the best parts of Solaris are now in GNU/Linux, such as ZFS and DTrace (shout out to Brian Cantrill).

With these economic forces, we can now have an enormously powerful and encompassing IT estate managed by a single pane of glass, as shown in this prophetic video.

Commoditization of all aspects of IT infrastructure

All of the forces building in the preceding sections created the conditions for the public clouds to emerge. The commoditization of these aspects, are particularly important.

I also observed that the ability for new innovations to build on (with gratitude) old ones has accelerated. Consider the anology of archeology. New cities are built on top of old ones, that’s why archeologists always have to dig to find the old stuff. We do the same thing with the cloud.

Look at the layer upon layer of software alone that now exists to run your Java servlet. 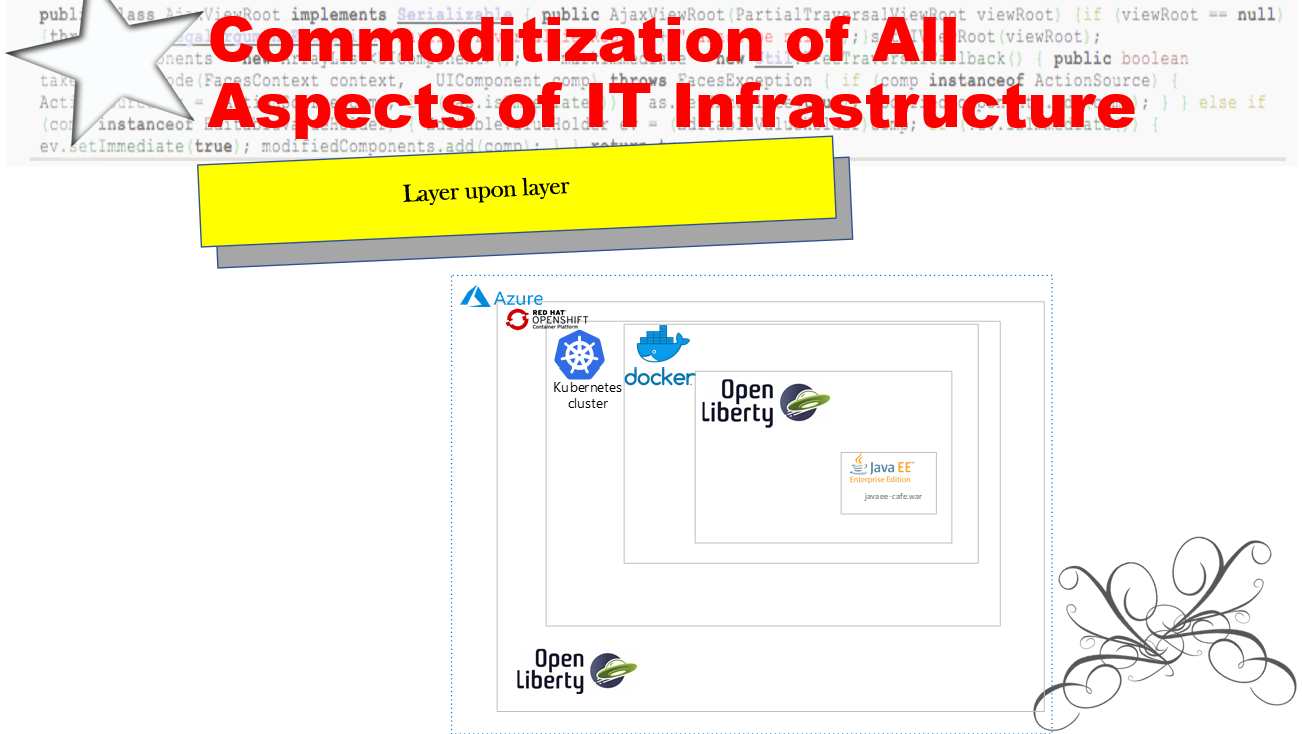 Another example, the design of HTTP/2. It borrows ideas from the session, transport and network layers of the OSI protocol stack, but is itself an application layer protocol. 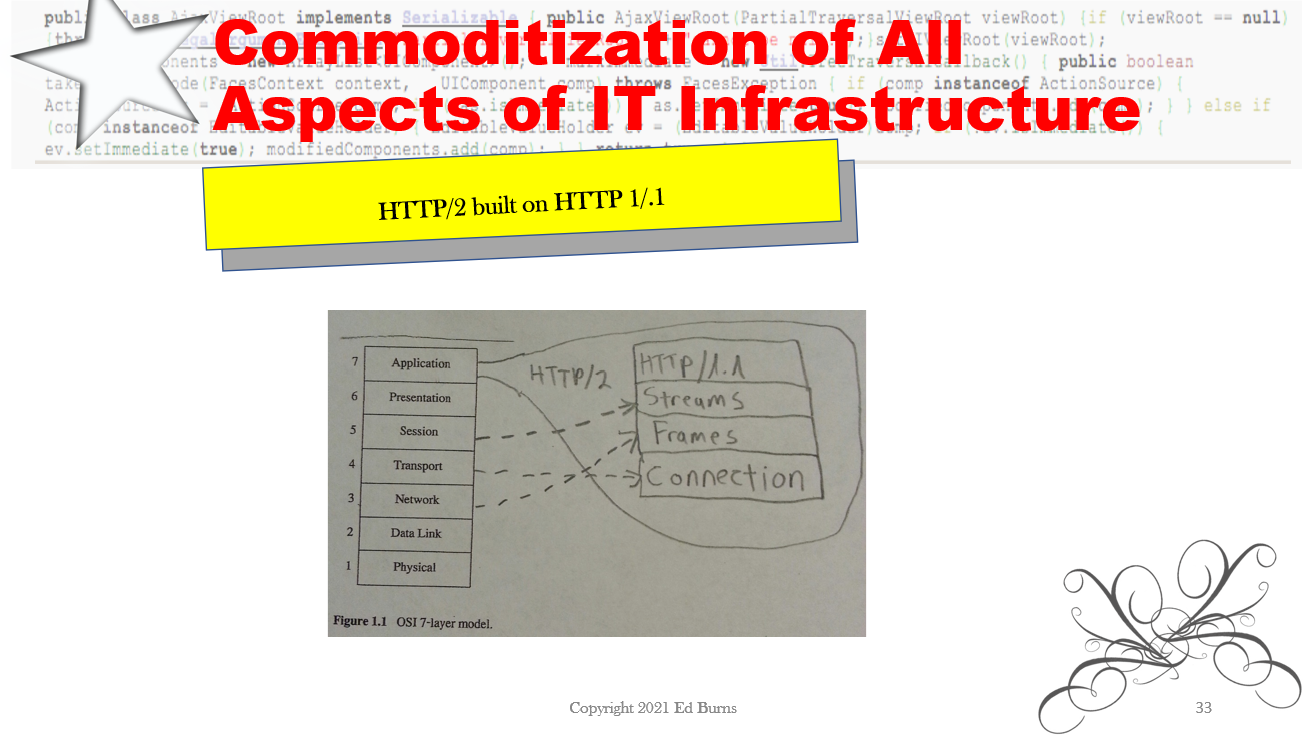 At this point, I pause to ask the audience to take some time to look into the history of the technologies you are using now? What are the ideas on which it is built? What ideas did your current thing reject as YAGNI? Was there any part of that rejected idea that you wish had not been rejected?

I closed the keynote with a look forward, taking Philip Armour’s five item list of knowledge representation media as a jumping off point.

But I asked what’s next after software? Perhaps it is just more software, but this time software that explains itself. Indeed, this is at the heart of machine learning model explainability. For more on this topic see Interpretable Machine Learning by Christoph Molnar.

Finally, I ask the audience a final question.

Is Worse is Better driving the development of today’s world changing technologies, such as AI and nano technology, as it did for the Web, Email, and Social networks? If you were in the position to make a Worse is better choice, which would you choose?